The Pittsburgh, Westmoreland and Somerset Railroad

The Byers-Allen Lumber Company was charted on April 15, 1899. It held title to a tract of lumber on Laurel Hill; 3,600 acres in Somerset County and 5,914 acres in Westmoreland County. In mid-1899, construction of a sawmill began southeast of Ligonier in the vicinity of where Ruthie's Diner is located. On July 20, 1899, Byers-Allen organized the Pittsburgh, Westmoreland and Somerset Railroad in order to reach its timber although construction on the line had actually begun in May. The first locomotive and log loader arrived in October 1899. Production at the mill began in January 1900.

By June 1900, the PW&S had been built to the top of Laurel Hill, about 10 miles from Ligonier; and, by November 1900, another 5 miles had been constructed in the direction of Somerset. It was not until 1905 that a serious effort was made to complete the PW&S to Somerset. In 1905, the PW&S extended its line to Gasteiger Cut on the incomplete and abandoned South Penn grade. From this point, the PW&S could utilize the South Penn grade, including the Quemahoning Tunnel, to reach Somerset, which the railroad accomplished on April 28, 1906. In 1908, the Blair Lumber Company built a line from their operation at Kuhn to a connection with the PW&S on Laurel Summit at a point known as Blair Siding.

As was typical of a logging railroad, grades were steep. The line between Ligonier and Mechanicsburg (Rector) was gentle in profile. However, at Rector, the climb up and over Laurel Hill began in earnest. The grade was steep and winding; the operating conditions dangerous. Several safety switches were constructed on Laurel Hill. These safety switches consisted of a switch and a short stretch of uphill track that would enable a runaway downhill train to stop in a controlled manner thus avoiding disaster. Once the South Penn grade was reached in Somerset County, the grades into Somerset were moderate. The grades and curvature on the spurs from the main track to reach logging sites were even worse; several had grades as great as 12%.

Although the purpose of the line was to haul logs to the Ligonier mill, it was soon discovered that additional revenue could be obtained by providing passenger service. A coach was purchased and on June 10, 1901 a schedule calling for four daily roundtrips was placed in service: two between Ligonier and Bluestone and two between Ligonier and Mechanicsburg. Passenger service to Somerset began when the line to that point was completed. There were then two daily roundtrips between Ligonier and Somerset, one morning and one afternoon. Passengers could connect with the B&O in Somerset or, more likely, with the PRR at Latrobe by transferring to the Ligonier Valley Rail Road at Ligonier. In addition to logs and passengers, the PW&S also hauled stone, coal and other general freight.

The PW&S used a combination of rod and geared (the Stemwinders) locomotives. The rod, or conventional, steam engines were former Pennsylvania Railroad locomotives. There were two Shay locomotives, one used and one purchased new. It is also believed that one Heisler engine was used for several years. By 1909, the timber had been exhausted, logging operations discontinued and the mill closed. The following year, the mill was dismantled and sold along with the Shay locomotives. Although the railroad continued to operate, in the absence of logging revenue the little remaining freight and passenger business was insufficient to allow the railroad to survive; all operations ceased as of September 23, 1916.

Written by Jim Aldridge, November 14, 2005 for the Ligonier Valley Railroad Association
References: "Stemwinders" in the Laurel Highlands and The Story of a Mountain Railroad. 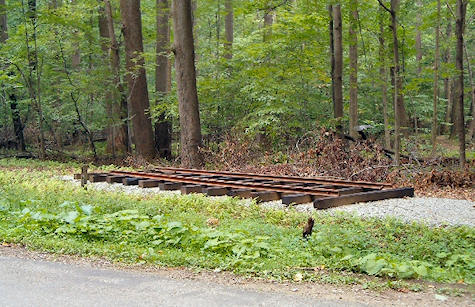 Parts of the old roadbed of the P.W.&S. is still visible in the area around Ligonier. The Rangers at the Linn Run Laurel Mountain State Park, in Rector PA, have located some original track and have started to lay the track on the original roadbed, as shown in the photo below. More information about the park and directions.

John Vucina, Ranger 1, is the local expert on the history of The P.W.&S. You can get park information and or questions answered by emailing Doug Finger, Park Manager.